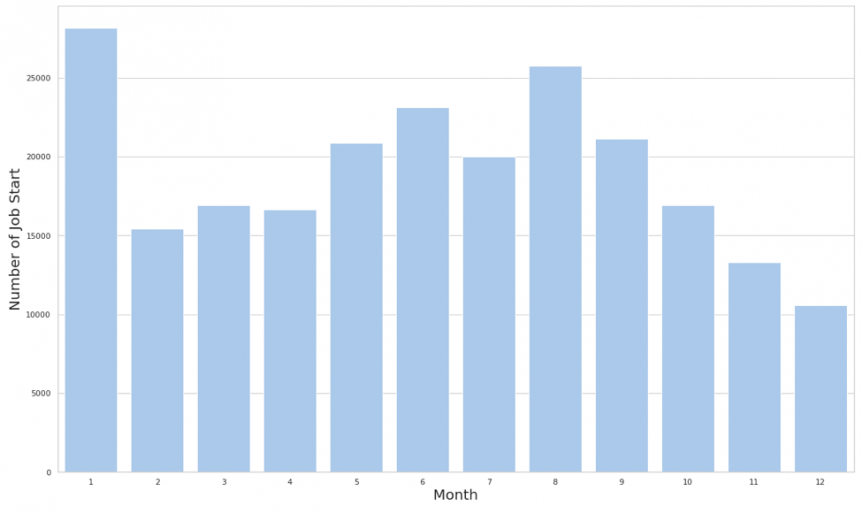 It is almost time to put away the candy and get the turkey ready—or for my in-laws, the Christmas tree. As the year is flying by us, we thought it would be fun to find out which month of the year has the highest number of job changes within the tech sector. For this analysis, we excluded internships to focus on full time employees.

With a sampling size of over 100,000 US tech employees’ work history, we find that January is when tech workers are most likely to switch jobs. This is expected since not much usually happens in December, with the lowest reported job changes based on our data. What was surprising is that August is the second highest month.  So next year, when you are taking your summer vacation, do it in June or July and get back to recruiting for August.

June is the third highest month and this could coincide with entry level workers going straight from universities.  Overall, summer does not seem to be a slow period for starting a new job. The opposite is true for Fall with November being the second slowest month of the year. While fall experiences a dip in job changes, the least comes in the late winter to early spring period around February to March. This is expected given the large spike in January, as tech employees settle into their new positions acquired at the start of the year. With that said, the following trends reflect research-backed cycles, while a more than expected spike in summer leaves additional questions beyond college graduates at the entry level. This may be attributed to less competition attracting job changes, the summertime vibe and climate lightening up moods and opening up networking possibilities, and a general slower pace of work.